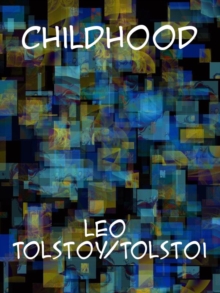 On the 12th of August, 18 - (just three days after my tenth birthday, when I had been given such wonderful presents), I was awakened at seven o'clock in the morning by Karl Ivanitch slapping the wall close to my head with a fly-flap made of sugar paper and a stick.

He did this so roughly that he hit the image of my patron saint suspended to the oaken back of my bed, and the dead fly fell down on my curls.

I peeped out from under the coverlet, steadied the still shaking image with my hand, flicked the dead fly on to the floor, and gazed at Karl Ivanitch with sleepy, wrathful eyes.

He, in a parti-coloured wadded dressing- gown fastened about the waist with a wide belt of the same material, a red knitted cap adorned with a tassel, and soft slippers of goat skin, went on walking round the walls and taking aim at, and slapping, flies.