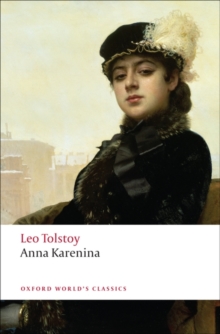 In 1872 the mistress of a neighbouring landowner threw herself under a train at a station near Tolstoy's home.

This gave Tolstoy the starting point he needed for composing what many believe to be the greatest novel ever written. In writing Anna Karenina he moved away from the vast historical sweep of War and Peace to tell, with extraordinary understanding, the story of an aristocratic woman who brings ruin on herself. Anna's tragedy is interwoven with not only the courtship and marriage of Kitty and Levin but also the lives of many other characters. Rich in incident, powerful in characterization, the novel also expresses Tolstoy's own moral vision. `The correct way of putting the question is theartist's duty', Chekhov once insisted, and Anna Karenina was the work he chose to make his point. It solves no problem, but it is deeply satisfying because all the questions are put correctly.