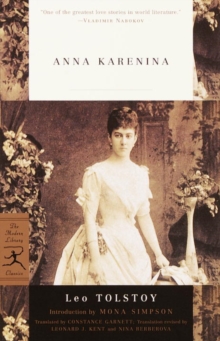 Part of the A Bantam classic series

This edition, the famous Constance Garnett translation, has been revised throughout by Leonard J.

Kent and Nina Berberova.Happy families are all alike; every unhappy family is unhappy in its own way.So begins Anna Karenina, Leo Tolstoy's great modern novel of an adulterous affair set against the backdrop of Moscow and St.

Petersburg high society in the later half of the nineteenth century.A sophisticated woman who is respectably married to a government bureaucrat, Anna begins a passionate, all-consuming involvement with a rich army officer.Refusing to conduct a discreet affair, she scandalizes society by abandoning both her husband and her young son for Count Vronsky--with tragic consequences.Running parallel is the story of the courtship and marriage of Konstantin Levin (the melancholy nobleman who is Tolstoy's stand-in) and Princess Kitty Shcherbatsky.Levin's spiritual searching and growth reflect the religious ideals that at the time Tolstoy was evolving for himself.Taken together, the two plots embroider a vast canvas that ultimately encompasses all levels of Russian society.Now and then Tolstoy's novel writes its own self, is produced by its matter, but its subject, noted Vladimir Nabokov.Anna Karenina is one of the greatest love stories in world literature.As Matthew Arnold wrote in his celebrated essay on Tolstoy:We are not to take Anna Karenina as a work of art; we are to take it as a piece of life.From the Hardcover edition.