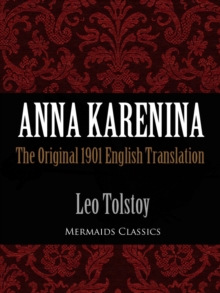 By: Tolstoy, Leo,  Garnett, Constance(Translated by)

ANNA KARENINA, the ORIGINAL 1901 English translation by Constance Garnett and written by Russian writer Leo Tolstoy (1828 - 1910) is considered as one of the greatest novels ever written and Tolstoys first true novel.

It is divided into eight parts and was initially published between the years 1873 to 1878 in a publication called The Russian Messenger as serial installments.

The main character Anna is married into Russian aristocrat and later has a love affair with a handsome military officer Count Vronsky.

Some major themes include marriage, fidelity, passion and jealousy set in nineteenth century Russian high society.This digital edition is beautifully formatted with an active Table of Contents that goes directly to each chapter and all eight parts of the story.

Mermaids Classics, an imprint of Mermaids Publishing brings the very best of old book classics to a modern era of digital reading by producing high quality books in ebook format.