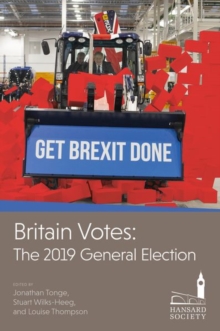 Part of the Hansard Society Series in Politics and Government series

The Conservatives' victory saw the demolition of much of Labour's 'red wall' of seemingly impregnable seats.

This volume explains how and why this happened. A team of distinguished academics examine how the dramatic Conservative triumph was achieved.

They assess the importance of the Prime Minister's promise to 'Get Brexit Done'; analyse the problems confronting a Jeremy Corbyn-led Labour Party and consider the longer-term social and political trends underpinning electoral change.

The election results are considered in depth, along with detailed analysis of the performance of each party.

What was the scale of the Tory triumph? How much was attributable to the failings of Labour and the Liberal Democrats, on Brexit, leaders, or policies?

The campaign tactics of each party are assessed, along with their financing and media strategies.

There is dedicated coverage of the contests in Scotland, Wales and Northern Ireland.

The volume also looks ahead to the next election, to befought in a very different context.

The sum of the parts is a vibrant and comprehensive analysis of an extraordinary election, indispensable for anyone interested in elections and parties.