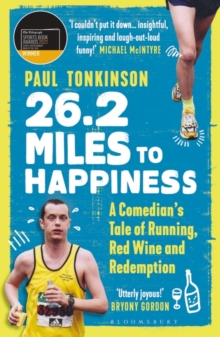 26.2 miles to happiness : a comedian's tale of running, red wine and redemption

In fact it is the only book about running I have ever read, but it is HILARIOUS!' - David Walliams'...insightful, inspiring and laugh-out-loud funny!' - Michael McIntyre'Pain.

Hope. Misery. Joy. All the big stuff. Excellent.' - Dara O Briain'This book is funny (which I expected) and concerns running (ditto), but it is also exceptionally moving and profound.

Don't be fooled: it's not really about completing a marathon.

It's about life and all its joy and weirdness. Recommended to all...' - Miranda Sawyer'Very good book... very funny, very insightful, very inspiring' - Chris Evans, Virgin Radio'Fabulous book' - Radio 2The hilarious trials and tribulations of stand-up comedian Paul Tonkinson as he attempts to beat the much lauded 3-hour mark at the London Marathon.

With a supporting cast of fellow comedians, this is a warmly written and wonderfully honest adventure-through-sport that will both entertain and inspire. Along the way, we are introduced to the characters helping Paul with his quest.

Celebrity names such as Bryony Gordon, Russell Howard, Roisin Conaty and Vassos Alexander pop up with wit and wisdom, alongside an alpine adventure to the Mayr Clinic with Michael McIntyre that pushes Paul to the limit. And not forgetting the 'words of wisdom' and derision from Paul's anti-running friend, Richard.