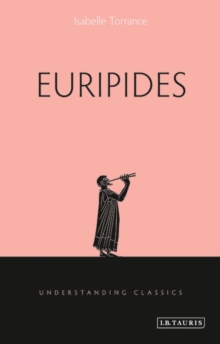 Part of the Understanding Classics series

Sophocles, Aeschylus and Euripides are often described as the greatest tragedians of the ancient world.

Of these three pivotal founders of modern drama, Euripides is characterized as the interloper and the innovator: the man who put tragic verse into the mouths of slaves, women and the socially inferior in order to address vital social issues such as sex, class and gender relations.

It is perhaps little wonder that his work should find such resonance in the modern day. In this concise introduction, Isabelle Torrance engages with the thematic, cultural and scholarly difficulties that surround his plays to demonstrate why Euripides remains a figure of perennial relevance.

Addressing here issues of social context, performance theory, fifth-century philosophy and religion, textual criticism and reception, the author presents an astute and attractively-written guide to the Euripidean corpus - from the widely read and celebrated Medea to the lesser-known and deeply ambiguous Alcestis.