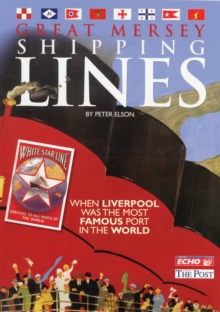 These were once internationally known household names such as Cunard, White Star, Canadian Pacific, Anchor, Bibby, Blue Funnel, Blue Star, Ellerman City & Hall, Furness Withy, Lamport & Holt, Booth, British India, Elder Dempster, Federal, Henderson, Pacific Steam Navigation, Royal Mail, Shaw Savill and New Zealand Shipping. It was a time when the Mersey and its men and women were at the hub of an astonishing web of trade routes that stretched out across the globe.

As the industry boomed, the lives of thousands of people on Merseyside were profoundly linked with the shipping companies as passengers, crew, employees and suppliers. From the majestic ocean liners to the humble coastal cargo ships, this is the story of Liverpool's great shipping lines, the people who worked for them and the iconic Merseyside buildings which their wealth created.