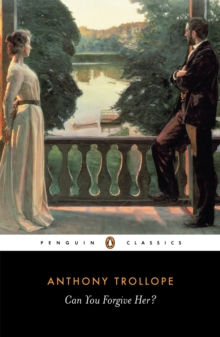 By: Trollope, Anthony,  Wall, Stephen(Edited by)

The first novel in Anthony Trollope's 'Palliser' series,Can You Forgive Her?traces the fortunes of three very different women in an exploration of whether social obligations and personal happiness can ever coincide. This Penguin Classics edition is edited with an introduction by Stephen Wall.

Alice Vavasor cannot decide whether to marry her ambitious but violent cousin George or the upright and gentlemanly John Grey - and finds herself accepting and rejecting each of them in turn. Increasingly confused about her own feelings and unable to forgive herself for such vacillation, her situation is contrasted with that of her friend Lady Glencora - forced to marry the rising politician Plantagenet Palliser in order to prevent the worthless Burgo Fitzgerald from wasting her vast fortune. In asking his readers to pardon Alice for her transgression of the Victorian moral code, Trollope created a telling and wide-ranging account of the social world of his day.

In his introduction, Stephen Wall examines Trollope's skill in depicting the strengths and weaknesses of his characters, their behaviour and inner lives. This edition also includes notes and a bibliography.

Anthony Trollope (1815-82) had an unhappy childhood characterised by a stark contrast between his family's high social standing and their comparative poverty. He wrote his earliest novels while working as a Post Office inspector, but did not meet with success until the publication of the first of his 'Barsetshire novels',The Warden(1855). As well as writing over forty novels, including such popular works asCan You Forgive Her?(1865), Phineas Finn(1869), He Knew He Was Right(1869) andThe Way We Live Now(1875) Trollope is credited with introducing the postbox to England.

If you enjoyedCan You Forgive Her?, you might enjoy Henry James'sThe Ambassadors, also available in Penguin Classics.