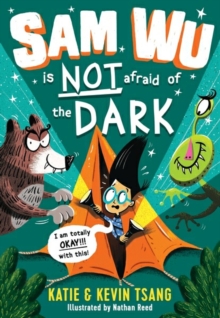 Sam Wu is NOT afraid of the dark!

Perfect for reluctant readers and fans of Pamela Butchart. Sam Wu is NOT afraid of anything. Except for quite a lot of things. Like ghosts. Sharks too. And also THE DARK! And so when Sam goes camping in the woods with his friends and cousin Stanley, who knows what scary kind of things they'll face . . .?Sam Wu is NOT Afraid of the Dark is the third book in this brilliantly funny and accessible new series - perfect for newly confident readers, fans of Pamela Butchart and Julian Gough's Rabbit and Bear. 'The third in the Sam Wu adventure series about conquering all sorts of fears in a humorous manner.

Since then they have lived on three different continents and travelled to over 40 countries together.

They currently live in London. Kevin was born in Copenhagen and grew up in Atlanta, Georgia.

Some of Sam Wu's experiences are based on Kevin's childhood (he's feeling much more confident now).

Katie was born and raised in Southern California. She has previously worked at Booktrust, the UK's largest children's reading charity, and also writes YA fiction as Katherine Webber.