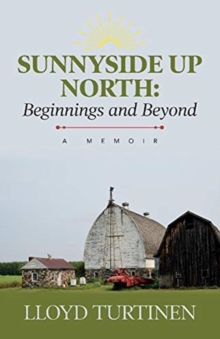 Sunnyside Up North: Beginnings and Beyond : A Memoir

This book is a somewhat humorous account of the early life and times of Lloyd W.

Turtinen written in chronological order with a series of short stories.

The initial section describes his experiences growing up on a dairy farm in northern Minnesota in the 50s and 60s in a Finnish-Scandinavian community.

The narrative consists of short story topics relating to both harsh realities of farm life and fun activities.

Highlighted are typical farm chores, sports, other activities including hunting and fishing, and mischievous events common during that time period.

From riding the school bus to humorous stories about school, the reader will not only learn about pigs, cats, cows, bulls, and ethnic foods, but will see how the farm molded him into the person he became.

The narrative continues as he goes off to college and experiences new freedoms and activities.

The final section commences with him entering the army following graduation from college.

The transition to military life includes the last adventure trip to the Sawtooth Mountains of Idaho before entering basic training.

Both basic training and advanced individual training is described in hilarious detail while he awaits his duty assignment at the Pentagon, Washington D.C.

After extensive vetting, he reports to the Defense Intelligence Agency and begins work as an intelligence courier.

The work environment of the Pentagon is described in a series of unique stories as is the barracks life outside of work.

This section continues as he is reassigned to Walter Reed Institute of Research as a research technician.

Here his job now changes from reading, routing, and delivering intelligence briefs at the Pentagon to sewing up baboons and dogs in the experimental surgery unit at Walter Reed Army Institute of Research in Washington D.C.