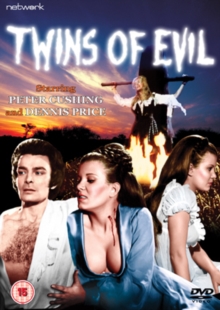 Hammer horror classic starring Peter Cushing. A pair of twins, Maria and Frieda, move from Vienna to the village of Karstein to live with Aunt Katy and grim Uncle Gustav (Cushing) in the shadow of the dreaded Karstein Castle.

Gustav is a fanatical Puritan and leader of a religious sect - the Brotherhood, feared for their witch hunts and burnings.

At the castle, a mock sacrificial rite is organised, where Count Karnstein stabs a girl strapped to a sarcophagus and reincarnates his vampire ancestor the beautiful Countess Mircalla Karnstein.

Her first act is to bite the count, turning him into a vampire.

The Count then captures the beautiful Frieda and sinks his fangs into her neck and she, too, is transformed into one of the undead.

The Brotherhood manage to capture Frieda and prepare to burn her at the stake but Karnstein manages to switch the twins.

Maria will face the fire while Frieda goes free to create evil havoc.