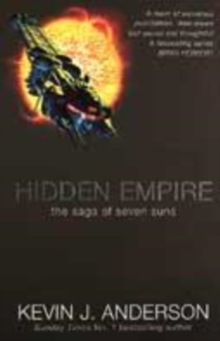 Part of the The saga of seven suns ; bk. 1 series

Hidden Empire begins a dazzling space opera fit to stand with the classics of the genre, combining the politics of Frank Herbert's Dune, the scope of Peter F.

Hamilton's Night's Dawn trilogy, and the pageantry and romance of Star Wars; In the far future, humanity began to search the stars, sending out vast spaceships that would take generations to reach their goals.

In the depths of space they encountered the Ildiran empire - apparently the galaxy's only other intelligent civilisation.

The Ildirans came to Earth and passed on the knowledge of their stardrive, allowing humanity to expand to the stars.

Almost two hundred years after that first contact, there are human colonies proliferating through the galaxy.

As Mankind seized the future, danger comes from the past, for two human archaeologists glean forbidden knowledge from the ruins of a dead world.

Once, the insect-like Klikiss ruled the stars. Now, only their robot servants remain, guardians of a terrible technology - the Klikiss Torch, which has the power to create suns.Now, Humanity prepares to flex its new found muscle and activate the Torch for the first time in millennia, but there are reasons the Klikiss empire fell, and a train of events is about to be set in motion, which will change the universe...