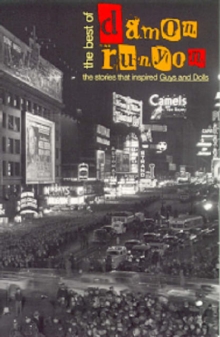 The best of Damon Runyon : the stories that inspired Guys and Dolls

You're about to enter Runyonland-a world of gamblers, hustlers, misfits, and showgirls...some loveable, some not...the guys and dolls of New York's fabled Great White Way-Broadway in the 1930s and '40s.

Damon Runyon started as a poet, became a highly paid sportswriter and a war reporter, but he will always be known for the remarkable short stories he wrote that helped create and define the word "runyonesque." Using his reallife friendships with the high and low-lifes around Times Square, Runyon created a cynical, but dazzling, world that has been entertaining readers for almost 70 years, and was the basis for the fabled Broadway show, the legendary Guys and Dolls.

Here are 30 of Damon Runyon's most celebrated stories, introducing us to memorable characters such as Sky Masterson, Miss Sarah Brown, Little Pink, Dark Dolores, Dream Street Rose, and many others.

These stories will be considered new by many of his fans since there is virtually no other short story collection available. - Even though he died in 1946, Damon Runyon has over 8,000 references on the web.