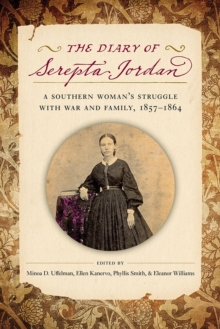 The Diary of Serepta Jordan : A Southern Woman's Struggle with War and Family, 1857-1864

Part of the Voices of the Civil War series

Discovered in a smokehouse in the mid-1980s, the diary of Serepta Jordan provides a unique window into the lives of Confederates living in occupied territory in upper middle Tennessee.

A massive tome, written in a sturdy store ledger, the diary records every day from the fall of 1857 to June 1864.

In this abridged version, Jordan reports local news, descriptions of her daily activities, war news, and social life. Orphaned at twelve, Jordan - her first name shortened to 'Rep' by family and friends - lived in bustling New Providence (now part of Clarksville), Tennessee, on the banks of the Red River.

Well educated by private tutors, Jordan read widely, followed politics, and was a skilled seamstress interested in the latest fashions.Jordan's descendants worked tirelessly toward ensuring the publication of this diary.

In its carefully annotated pages, readers will learn about the years of sectional conflict leading up to the war, the diarist's dizzying array of daily activities, and her attitudes toward those she encountered.

Jordan takes a caustic tone toward Union occupiers, whom she accused of 'prancing round on their fine horses.' She routinely refers to the USA as 'Lincolndom' and describes her contempt toward the African Americans in the blue uniforms of the Union army.

She seems to have also harbored a bitter resentment toward the 'elites' on the other side of the river in Clarksville.

This one-of-a-kind volume not only adds a distinct female voice to the story of the Civil War, but also a unique new picture of the slow but steady disintegration of the 'peculiar institution' of slavery.