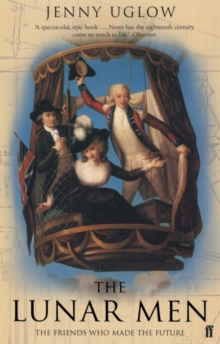 In the 1760s a group of amateur experimenters met and made friends in the Midlands.

Most came from humble families, all lived far from the centre of things, but they were young and their optimism was boundless: together they would change the world.

Among them were the ambitious toy-maker Matthew Boulton and his partner James Watt, of steam-engine fame; the potter Josiah Wedgewood; the larger-than-life Erasmus Darwin, physician, poet, inventor and theorist of evolution (a forerunner of his grandson Charles).

With a small band of allies they formed the Lunar Society of Birmingham (so called because it met at each full moon) and kick-started the Industrial Revolution.

Blending science, art and commerce, the "Lunar Men" built canals, launched balloons, named plants, gases and minerals, changed the face of England and the china in its drawing rooms and plotted to revolutionize its soul.

This exhilarating account uncovers the friendships, political passions, love affairs, and love of knowledge (and power) that drove these extraordinary men. It echoes to the thud of pistons and the wheeze and snort of engines, and brings to life the tradesmen, artisans and tycoons who shaped and fired the modern age.