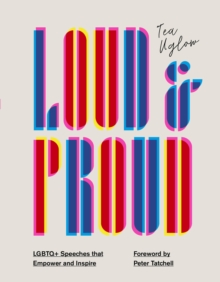 Loud and proud : LGBTQ+ speeches that empower and inspire

Loud and Proud is an inspirational collection of speeches from the LGBTQ+ community and its allies that have changed our world, and the conversation. A sister volume to So Here I Am: Speeches by Great Women to Empower and Inspire, Loud and Proud places the voices of the vibrant LGBTQ+ community centre stage in the first-ever anthology of LGBTQ+ speeches.

From equal marriage to the AIDS crisis, bullying to parenthood, the first 19th century campaigns through to the new trans rights allyship, the issues covered in these speeches touch on all aspects of LGBTQ+ life and reflect the diverse and multi-faceted nature of this community.

Pour through a pioneering collection of talks, declarations and lectures, from people whose voices have too often been marginalised and the allies that support them;Find over 40 empowering and influential speeches that chart the history of the LGBTQ+ movement up to the present day;Each speech is presented with a striking photographic portrait and an insightful introduction, offering essential context, fresh insights and a nuanced understanding that brings each character and their words to life. A ribbon keeps your place in the book. We are stronger when we stand together, and this collection from award-winning activist Tea Uglow encourages us to do just that whilst celebrating the beauty of our differences. The voices: Audre Lorde; Harvey Milk; Munroe Bergdorf; Sir Elton John; Sir Ian McKellen;George Takei; Sylvia Rivera; Bayard Rustin; Elizabeth Toledo; Alison Bechdel; Loretta E.