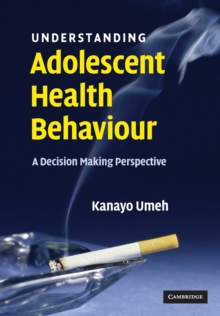 Smoking, drinking, unhealthy eating: how can we explain these actions in teenagers?

Do teenagers stop to consider potential hazards or is their decision making frantic and impulsive, with little rational thought?

In this intriguing book, Kanayo Umeh debunks conventional explanations of teenage behaviour (peer pressure, self-esteem issues, parent-child conflicts) and offers a fresh perspective based on the premise that teenagers, like adults, retain the power of choice.

He shows that adolescents sometimes readily commit to a course of action despite being sceptical about its benefits, and reveals how decision strategies that appear ill-considered to adults are regarded as smart by adolescents, and with convincing justifications.

Contrary to stereotypes, the teenager emerges as a curious individual: a multifaceted decision maker whose actions may not be quite as mindless as popular myth suggests.