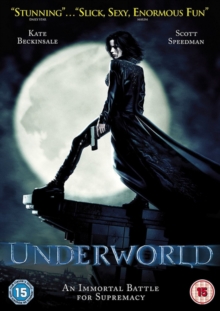 Two underground communities, the sophisticated Death Dealers (vampires), and the feral Lycans (werewolves), have been battling for supremacy and hidden from the mortal world for centuries.

That is until one night when one of their battles is witnessed by a young doctor, Michael Corvin (Scott Speedman).

When a leading member of the Death Dealers, Selene (Kate Beckinsale), discovers a Lycan plot to kill the doctor she decides to follow him.

But the more Selene follows him the more attracted to the man she becomes, and is convinced that the Lycan's are planning a major attack.

When Corvin is attacked by a Lycan and becomes a werewolf, and a sworn enemy of her race, Selene finds herself in a dilemma.