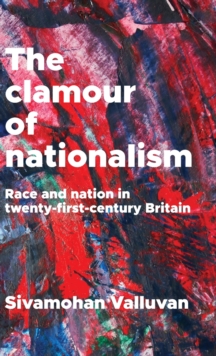 The clamour of nationalism : race and nation in twenty-first-century Britain

Nationalism has reasserted itself today as the political force of our times, remaking European politics wherever one looks.

Britain is no exception, and in the midst of Brexit, it has even become a vanguard of nationalism's confident return to the mainstream.

Intellectual attempts to account for nationalism's resurgence have however floundered.

Desperately trying to read nationalism through one overarching cause - as capitalist crisis, as cultural backlash, or as social media led anti-Establishment politics - these accounts have proven woefully inadequate.

To understand it as the key force of modernity that calls upon all existing ideological traditions in asserting its appeal: whether it is liberal, conservative, neoliberal or left-wing.

This ideological clamour that characterises today's British nationalism requires both recognition and theorisation.

A meaningful understanding of new nationalism must reckon with the ideological range animating it and the deeply hostile aversion to different racial minorities that pervades its respective ideologies.

Drawing on a variety of cultural and political themes - ranging from Corbyn's dithering, the cult of Churchillism, the neoliberal fixation with a 'point-system' immigration policy, the muscular secularism of Richard Dawkins and friends, fears that the white working class have 'become black', and even simply the strange appeal of Harry Potter and Game of Thrones - this book provides a dazzling but always detailed study of how nationalism is the politics of today only because it is a politics of everything. -- .