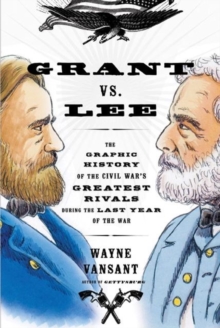 Grant vs. Lee : the graphic history of the Civil War's greatest rivals during the last year of the war

In Grant vs. Lee, graphic novel author and artist Wayne Vansant narrates the story of the two greatest generals during the last year of the Civil War: General Ulysses S.

Grant and General Robert E. Lee. In many ways, the campaigns these two led against each other in 1864-65 represented the beginning of modern warfare - the era of the strategic and gentleman amateur was over.

With his signature illustrative style and renowned historical accuracy, Vansant recounts the horrific battles between Grant's Union Army and Lee's Confederates: Grant's loss of 17,000 men in a single day at Chancellorsville, the later loss of 7,000 Union men in less than one hour at Cold Harbor, the yearlong stalemate at Petersburg and the near starvation of the Confederate Army, the final battle at Sayler's Creek, and Lee's ultimate surrender to Grant at Appomattox Court House on April 9, 1865.

Grant vs. Lee, with the same gripping combination of art and dramatic storytelling that characterizes all of Wayne Vansant's work, tells the tale of the Civil War's bloodiest year through the eyes of these two legendary leaders - and the Union and Confederate troops that lived through it.