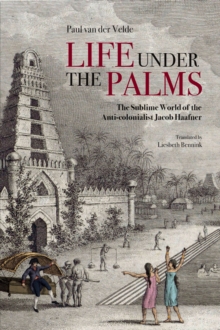 Life Under the Palms : The Sublime World of the Anti-colonialist Jacob Haafner

Jacob Gotfried Haafner (1754-1809) was a writer of great talent, and an early dissenting voice from within the colonial enterprise.

Haafner was orphaned in the Dutch East Indies, and lived in South Africa, Sri Lanka, India and Mauritius for more than 20 years.

On his return to Europe he transformed himself into one of the most popular Dutch writers of the early 19th century, for his travel writing in the Romantic mode.

Books like his popular Travels in a Palanquin were translated into the major European languages, and his essays on the havoc wrought by missionaries worldwide stirred up great controversy, particularly in his home country of the Netherlands.

He was a fierce critic of English machinations in India: "Had I to write the history of the English and their deeds in Asia", Haafner once said, "it would be the spitting image of hell".

But there was a scholarly side to him to complement the pamphleteer and travel writer, working to promote European understanding of Indian literature, myth and religion, including through his translation of the Ramayana into Dutch.With the help of generous excerpts from Haafner's own writings, including material newly translated into English, van der Velde tells an affecting story of a young man who made a world for himself along the Coromandel Coast, in Ceylon and Calcutta, but who returned to Europe to live the last years of his life in Amsterdam, suffering an acute nostalgia for Asia: "No, in Europe and especially in its northern climes, no one enjoys their life..." This will be compelling reading for anyone interested in European response to the cultures of Asia.