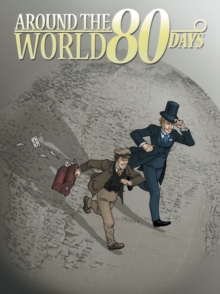 Around the world in 80 days

Around the world in 80 days

IDW is proud to introduce a new line of graphic novels that adapt some ofthe best-loved books of all-time.

Next in the line is Jules Verne's Aroundthe World in 80 Days. Travel around the globe in eighty days! This is the crazy bet that theEnglish gentleman Phileas Fogg accepts from the members of the eminent LondonReform Club in 1872.

He drags his manservant Passepartout from steamboat torailway in a reckless race against time.

The whole English police force -convinced that he is the fabulous thief who has just robbed the Bank of England- is also dragged into the race, with Detective Fix at their head.

It is awonderful adventure where their paths cross that of a beautiful Indian womandestined for the funeral pyre, and where bridges collapse and ships burn... butwill the gentleman's extravagant expenditure be enough to get them back in timefor the day and hour they are due to arrive?