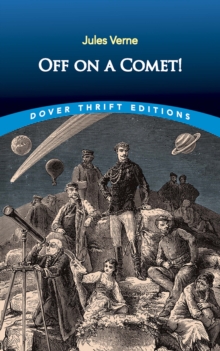 Off on a Comet!

Nearly a century before space travel captured the imaginations of science-fiction writers and readers, Jules Verne envisioned an incident in which a comet impact in the vicinity of Gibraltar sends a piece of the Earth on a two-year trip around the solar system.

Thirty-six unsuspecting individuals of various nationalities are swept away by the collision.

The tension builds as they struggle to understand what has happened and to cope with their new environment.

The involuntary travelers are forced to put aside their differences to survive in an increasingly frigid atmosphere and to try to find their way home.

Verne's passion for travel and his interest in space exploration are reflected in this rollicking adventure, which is further elevated by his gift for creating a dramatic narrative and realistic personalities.

This edition of Off on a Comet! features illustrations from the original French publication that complement the author's droll observations of his contemporaries' superstitions and foibles.