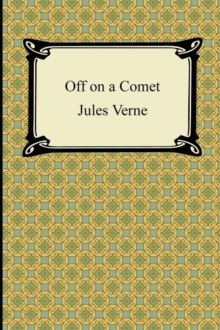 Off on a Comet

Jules Gabriel Verne (1828-1905) has been ranked alongside Hugo Gernsback and H.G.

Wells for the title of Father of Science Fiction. The French novelist wrote about scientific and technological advancements - particularly in air, space and water travel - before they existed.

His popular stories of travelers in unknown realms, known as his voyages extraordinares, have made him the second-most translated author in the world.

His 1877 novel, Off on a Comet, takes place on a large comet that has brushed by Earth and picked up a few chunks on the way.

Among the forty odd characters of various nationalities are a French foreign legionnaire and his sidekick, who must survive and adapt to the cold comet's extreme climate changes as it orbits wildly by Mars and Venus.

This imaginative novel is impressive for its relative scientific accuracy, but has spurred controversy for elements of anti-Semitism in the characters and narrative.