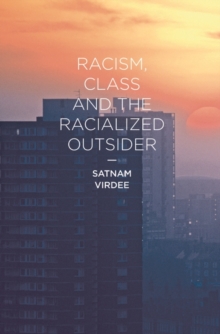 Racism, class and the racialized outsider

"Racism, Class and the Racialized Outsider is that rare thing nowadays, an academic book that not only engages with a wider public but also provides a sharp campaigning edge to the analysis.

Historical and broad in its coverage, this is one of the best accounts of contemporary racism published in a good long time." Mark Perryman, Philosophy Football Racism, Class and the Racialized Outsider offers an original perspective on the significance of both racism and anti-racism in the making of the English working class.

While racism became a powerful structuring force within this social class from as early as the mid-Victorian period, this book also traces the episodic emergence of currents of working class anti-racism.

Through an insistence that race is central to the way class works, this insightful text demonstrates not only that the English working class was a multi-ethnic formation from the moment of its inception but that racialized outsiders - Irish Catholics, Jews, Asians and the African diaspora - often played a catalytic role in the collective action that helped fashion a more inclusive and democratic society.