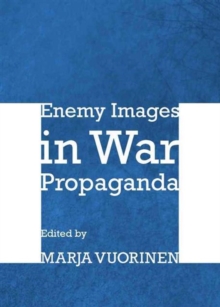 In the post 9/11 world, the emotionally charged concepts of identity and ideology, enmity and political violence have once again become household words.

Contrary to the serene assumptions of the early 1990s, history did not end.

Civilisations are busy clashing against one another, and the self-proclaimed pacified humanity is once again showing its barbaric roots.Religion mixes with politics to produce governments that abuse even their own citizens, and victorious insurgents too often fail to carry out the promised reforms.

Terrorists blow up unsuspecting pedestrians, and allegedly democratic nations threaten to bomb allegedly less democratic ones back to the Stone Age.

Mass demonstrations materialise like flash mobs out of nowhere, prepared to hold their ground until the bitter end.Where does all this passionate intensity come from?

To better understand how the ideological enmity of today is moulded, spread and managed, this book investigates the propaganda operations of the past.

Its topics range from the ruthless portrayal of female enemy soldiers in an early-20th-century civil war setting to the multiple enemy images cherished by Adolf Hitler, and onwards, to the WWII Soviet Russians as a subtype of a more ancient notion of the Eastern Hordes.

Of more recent events, the book covers the Rwandan genocide of 1994 and the still ongoing Israel-Palestine conflict.

The closing chapter on cyber warfare introduces the reader to the invisible enemies of the future.