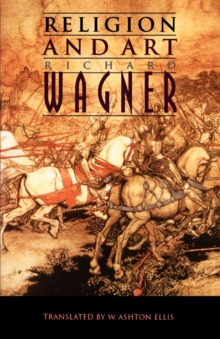 "One might say that where Religion becomes artificial, it is reserved for Art to save the spirit of religion." With these words Richard Wagner began "Religion and Art" (1880), one of his most passionate essays.

That passion made Wagner himself a central icon in the growing cult of art.

Wagner felt that he lived in an age of spiritual crisis. "It can but rouse our apprehension, to see the progress of the art-of-war departing from the springs of moral force, and turning more and more to the mechanical," he wrote.

In response to the frightening progress of dynamite and steel, Wagner adopted the role of the Tone Poet Seer, who reveals the inexpressible in concert halls and cleanses souls in waves of symhonic revelation. "Religion and Art" is the pivot of the works collected here.

Also included are his defining essays "Public and Popularity" and "The Public in Time and Space"; his papers relating to the creation of the Bayreuth School; his complaint against publishers, "On Poetry and Composition" (1879); his article on the first production of Parsifal (1882); and other works that speak his mind about strengthening the spirit through music. These works participated in the duel between Wagner and Nietzsche that ensued after the breakup of their friendship in 1878.

Nietzsche publicly called Wagner an incurable romantic, emphasizing how sick he thought both Wagner and his art were.

Here Wagner counterattacks with arch innuendo and sarcasm. This edition includes the complete volume 6 of the 1897 translation of Wagner's works commissioned by the London Wagner Society.