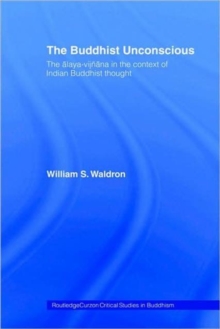 The Buddhist unconscious : the åalaya-vijänåana in the context of Indian Buddhist thought

Part of the Routledge Critical Studies in Buddhism series

This is the story of fifth century CE India, when the Yogacarin Buddhists tested the awareness of unawareness, and became aware of human unawareness to an extraordinary degree.

This is the concept of the 'Buddhist unconscious', which arose just as philosophical discourse in other circles was fiercely debating the limits of conscious awareness, and these ideas in turn had developed as a systematisation of teachings from the Buddha himself.

For us in the twenty-first century, these teachings connect in fascinating ways to the Western conceptions of the 'cognitive unconscious' which have been elaborated in the work of Jung and Freud.

This important study reveals how the Buddhist unconscious illuminates and draws out aspects of current western thinking on the unconscious mind.

One of the most intriguing connections is the idea that there is in fact no substantial 'self' underlying all mental activity; 'the thoughts themselves are the thinker'.

William S. Waldron considers the implications of this radical notion, which, despite only recently gaining plausibility, was in fact first posited 2,500 years ago.