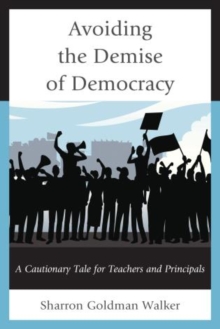 Avoiding the demise of democracy : a cautionary tale for teachers and principals

In the seventies, countries lauded American education as one of the best systems in the world.

Then came the accountability movement. What was measured was what counted. Those who measured low were punished. Those who measured high were rewarded. With measurements came the loss of emphasis on the critical thought so necessary to the preservation of American democracy and improving the American way of life. Where do children learn the skills, practice and habits of democracy? Sharron Goldman Walker's second volume on democracy in education asks educators, especially teachers and principals, to contemplate their roles in education and its connections with the preservation of American democracy. Do we send children to school to learn only how to achieve high scores on high stakes tests?

If democracy is not learned by practice in the schoolhouse, how will children recognize it when they leave it?

Will they be able to critically reflect upon the issues presented to them?

Without the ability to critically reflect upon divergent views through reasoned discourse what will be the quality of the democracy?