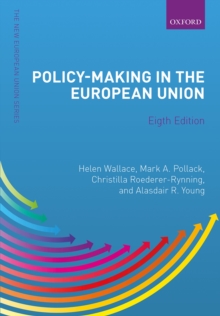 Policy-Making in the European Union

Part of the The new European Union series series

From agriculture to security, the policies of the European Union have wide-reaching consequences for the EU's member states and citizens, and for the wider world.

Policy-Making in the European Union begins with an overview of EU policy-making as a whole, defining the processes and institutions involved, and introducing the analytical approaches that are necessary for understanding them.

A wide range of policy areas are then explored in detail, including thesingle market, environmental policy, migration, and foreign policy. The eighth edition recognises the expansion of the EU's policy agenda, exploring how the EU's digital policy has evolved in an increasingly digital society.

It also considers the effects of key international developments, including the impact of Brexit on EU policies, and the EU's actions regarding climate change, following the 2015 Paris Climate Accord and the United States' subsequent withdrawal. Exploring the link between the modes and mechanisms of EU policy-making and its implementation at national level, Policy-Making in the European Union helps students to engage with the key issues related to policy.

Written by experts, for students and scholars alike, this is the most authoritative and in-depth guide to policy-making in the European Union.

Price on Application:
Contact us for further details
Other Formats