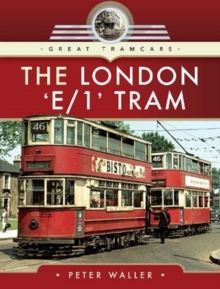 Part of the GREAT TRAMCARS series

Probably the single most numerous of tramcar constructed for operation on Britain's first generation electric tramways, the London County Council's 'E/1' class had an operational history that stretched for almost 50 years.

The first were produced towards the end of the first decade of the 20th century and the last were withdrawn with the conclusion of 'Operation Tramaway' - the final conversion of the once great London tramway system - in July 1952. Over the years, more than 1,000 were built for operation by the LCC with similar cars being constructed for a number of the council operated systems in the capital prior to the creation of the LPTB in July 1933\.

The last batch - effectively rebuilds of single-deck cars that had once operated through the Kingsway Subway prior to its modernisation - not completed until the early 1930s.

During the 1920s the LCC cars had undergone a Pullmanisation programme and, during the following decade, a number underwent the LPTB's Rehabilitation scheme.

Moreover, with the removal of the restriction on the use of enclosed lower-deck vestibules, many others were converted to fully-enclosed during that decade. Although withdrawals commenced in the 1930s, as the tram system north of the river was converted to trolleybus operation, and others were lost as a result of enemy action during the war, a sizeable number survived to the system's final days. This book examines the history of this important class from development through to preservation.