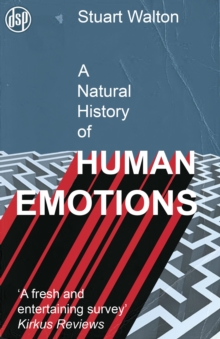 A Natural History of Human Emotions

'I love Walton's work for its deftness in combining high culture with demotic allusions.

Michael Douglas, the Simpsons and Dolly Parton jostle Schopenhauer, Sophocles and Adorno in his pages.' Felipe Fernandez-Armesto, The TimesCharles Darwin believed that the emotions of all human beings are as innate and as regular as our bone structure.Using Darwin's survey of emotions as a starting point, Stuart Walton's masterly study examines the meaning of each of our core emotions - fear, anger, disgust, sadness, jealousy, contempt, shame, embarrassment, surprise, and happiness - and how they have influenced both cultural and social history.

Thus primitive fear served as the engine of religious belief, while a desire for happiness led to humankind's first musings on achieving a perfect utopia.

Ranging from the classi to recent pop culture, A Natural History of Human Emotions is an idiosyncratic examination of human feelings - and the way in which we display them.

It challenges the notion that our emotional reactions are pretty much constant, unchanged over centuries and instead looks at how emotional responses have changed throughout history - and looks at what we might expect in the future.'A boldly independent book.

Walton strives for originality in both chapter and verse...A carnival of episodes and cultural examples...Walton is a writer, which is more than can be said of most authors.' Marek Kohn, Independent'Historians, anthropologists and philosophers have long investigated the gamut of human emotions; here their conjectures and influences coalesce...Drawing on a spectrum of rich references...Walton sheds light on how we have arrived at an age when Sir Thomas More's utopia comes in pill form.' Library Journal'Walton's book raises fascinating questions; it is a timely and thought-provoking work and demonstrates an intellectual agility that, dare I say it, even Plato would admire.' Lesley McDowell, Sunday Herald'A fresh and entertaining survey.' Kirkus Reviews