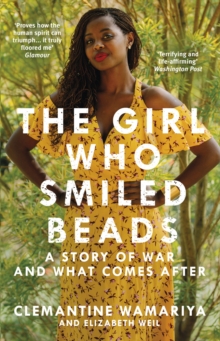 The girl who smiled beads : a story of war and what comes after

A riveting story of dislocation, survival, and the power of stories to break or save usWhen Clemantine Wamariya was six years old, her world was torn apart.

She didn't know why her parents began talking in whispers, or why her neighbours started disappearing, or why she could hear distant thunder even when the skies were clear. As the Rwandan civil war raged, Clemantine and her sister Claire were forced to flee their home.

They ran for hours, then walked for days, not towards anything, just away. they sought refuge where they could find it, and escaped when refuge became imprisonment.

Together, they experienced the best and the worst of humanity.

After spending six years seeking refuge in eight different countries, Clemantine and Claire were granted refugee status in America and began a new journey. Honest, life-affirming and searingly profound, this is the story of a girl's struggle to remake her life and create new stories - without forgetting the old ones. ____________________________________'Extraordinary and heartrending.

Wamariya is as fiercely talented as she is courageous' JUNOT DIAZ, author of The Brief Wondrous Life of Oscar Wao'Brilliant ... has captivated me for a couple of years' SELMA BLAIR