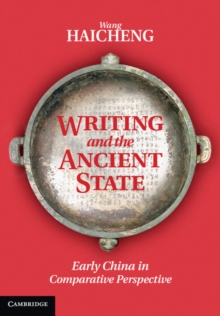 Writing and the ancient state : early China in comparative perspective

Writing and the Ancient State explores the early development of writing and its relationship to the growth of political structures.

The first part of the book focuses on the contribution of writing to the state's legitimating project.

The second part deals with the state's use of writing in administration, analyzing both textual and archaeological evidence to reconstruct how the state used bookkeeping to allocate land, police its people, and extract taxes from them.

The third part focuses on education, the state's system for replenishing its staff of scribe-officials.

The first half of each part surveys evidence from Mesopotamia, Egypt, the Maya lowlands, Central Mexico, and the Andes; against this background the second half examines the evidence from China.

The chief aim of this book is to shed new light on early China (from the second millennium BC through the end of the Han period, ca. 220 AD) while bringing to bear the lens of cross-cultural analysis on each of the civilizations under discussion.