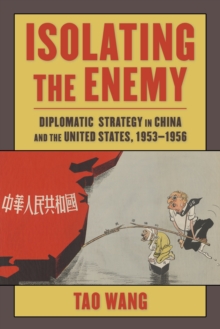 Isolating the Enemy: Diplomatic Strategy in China and the United States, 1953-1956

In the crucial moment after the Korean War, the United States and the People's Republic of China circled each other warily.

They shifted between confrontation and conciliation, ratcheting up tension yet also embarking on peace initiatives.Tao Wang offers a new account of Sino-American relations in the mid-1950s that situates the two great powers in their international context.

He reveals how both the United States and China adopted a policy of attempting to isolate their adversary and explores how Chinese and American leaders perceived and reacted to each other's strategies.

Although the policy of the Eisenhower administration was to contain China, Washington often overestimated Chinese aggressiveness, worrying allies and neutral states.

Sensitive to the differences within the Western camp, Chinese leaders sought to convince American allies to persuade the United States to back down.

He challenges the portrayal of Communist states as driven by ideology, showing that Chinese leaders adopted a pragmatic policy during these crucial years.Drawing on Chinese, Taiwanese, Russian, Vietnamese, British, and American archival material, including reclassified Chinese Foreign Ministry documents, Isolating the Enemy offers new insight into Chinese diplomacy in the 1950s and U.S. foreign policy under the Eisenhower administration through a nuanced portrayal of Sino-American interactions.