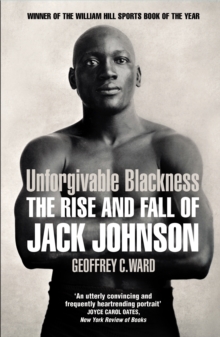 Unforgivable blackness : the rise and fall of Jack Johnson

WINNER OF THE WILLIAM HILL SPORTS BOOK OF THE YEAR AWARDHe was the first black heavyweight champion in history (1908-15) and the most celebrated - and most reviled - African American of his age.

Ward brings to vivid life the real Jack Johnson, a figure far more complex than the newspaper headlines could ever convey. Johnson battled his way from obscurity to the top of the heavyweight ranks and in 1908 won the greatest prize in American sports - one that had always been the preserve of white boxers.

At a time when whites ran everything in America, he took orders from no one and resolved to live as if colour did not exist. Because of this, the federal government set out to destroy him and he was forced to endure a year of prison and seven years of exile.

As Ward shows, Johnson was seen as a perpetual threat to white and African Americans alike - profligate, arrogant, amoral, a dark menace and a danger to the natural order of things. Unforgivable Blackness is the first full-scale biography of Johnson in more than twenty years.

Accompanied by more than fifty photographs and drawing on a wealth of new material - including Johnson's never-before-published prison memoir - it restores Jack Johnson to his rightful place in the pantheon of sporting and social warriors.