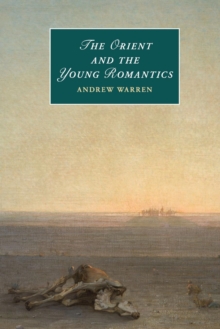 The Orient and the young romantics

Part of the Cambridge Studies in Romanticism series

Through close readings of major poems, this book examines why the second-generation Romantic poets - Byron, Shelley, and Keats - stage so much of their poetry in Eastern or Orientalized settings.

It argues that they do so not only to interrogate their own imaginations, but also as a way of criticizing Europe's growing imperialism.

For them the Orient is a projection of Europe's own fears and desires.

It is therefore a charged setting in which to explore and contest the limits of the age's aesthetics, politics and culture.

Being nearly always self-conscious and ironic, the poets' treatment of the Orient becomes itself a twinned criticism of 'Romantic' egotism and the Orientalism practised by earlier generations.

The book goes further to claim that poems like Shelley's Revolt of Islam, Byron's 'Eastern' Tales, or even Keats's Lamia anticipate key issues at stake in postcolonial studies more generally.