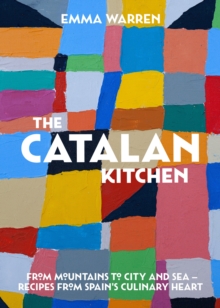 The Catalan kitchen : from mountains to city and sea - recipes from Spain's culinary heart

Catalonia is a region situated on the west coast of the Mediterranean and blessed with one of the richest food cultures in Europe.

Although Catalonia is still geographically and politically connected to Spain, Catalans consider themselves independent with their own language, history, culture, and cuisine.

Its food is considered unique in Spain, and it is home to one of the highest concentrations of Michelin-starred restaurants in the world.

Catalan cuisine does not centre around tapas, and although pintxos do feature heavily, they are not the mainstay of the region and most dishes are larger, stand-alone meals.

As The Catalan Kitchen illustrates, the best dishes are heavily influenced by pork and fresh seafood, with a focus on fresh, seasonal produce that varies from recipes as simple as crushed tomatoes smeared on bread to hearty, slow-cooked stews.

Famous dishes include calcots-large salad onions cooked on a coal barbecue and then dipped into nutty and addictive Romesco sauce, a unique paella made without saffron and the addition of vermicelli noodles, myriad types of Catalan sausage served with white beans, sauces such as aioli and picada, and multiple pastries and desserts including creme Catalan.

This is the ultimate cookbook for lovers of Spanish and Mediterranean food.