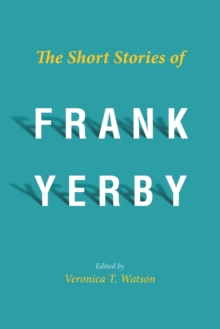 The Short Stories of Frank Yerby

By: Watson, Veronica T.(Edited by)

Frank Yerby's first novel, The Foxes of Harrow, established him as a writer and launched a forty-nine-year career in which he published thirty-three novels.

He also became the first African American writer to sell more than a million copies of his work and to have a book adapted into a movie by a Hollywood studio.

He garnered legions of loyal fans of his writing. Yet, few know that Yerby began his writing career with the publication of a short story in his school newspaper in 1936, the first of nine stories he would publish in the 1930s and '40s.

Most stories appeared in small journals and magazines and were largely forgotten once he started writing novels.This groundbreaking collection gives readers access to an intriguingly diverse selection of Yerby's short fiction.

The stories collected here, eleven of which have never previously been published, paint a picture of Yerby as an intellectual who thought deeply about several philosophical questions at the center of understanding what it means to be human.

The stories also reveal him as an artist committed to exploring a range of human drives, longings, conflicts, and passions, from the quirky to the serious, and in a variety of writing styles.

With an attention to historical detail, voice, and character that he became known for, these stories give us new insights into this important African American writer who dared to believe he could earn a living as a writer.