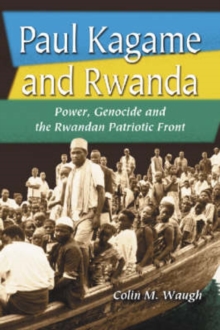 In 1994, ethnic conflict turned to genocide in Rwanda.

When the world finally took notice, a million people lay dead, and the small African country lay in ruins.

Rwanda returned from the brink guided by rulers determined to rebuild the country on their own terms, rather than those of a previously indifferent international community.

Young, unconventional, not without flaws and critics - Kagame is key to understanding Rwanda's transition from a country that had known only fear, division and clan-based nepotism for many years to an exceptional African state built upon traditional order and values.

Paul Kagame's life - from exiled child refugee, to guerilla warrior and rebel politician, to President of Rwanda - is traced in this exploration of the influences on Rwanda's struggle for change. Analyzing the conflicts and challenges of post-genocide Rwanda in comparison to modern parallels, the work invites reassessment of Kagame's leadership and government in an African context rather than measurement against Western standards, and critiques Western involvement in Rwanda since the early 1990s.

Twenty-eight photographs and three maps supplement the text, as do a history of Rwanda's Banyarwanda people and a glossary of words in Kinyarwanda, their language.

The work includes a bibliography and an index.~