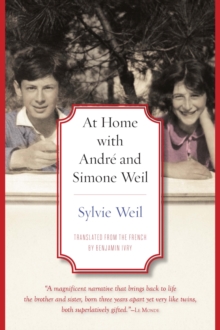 At Home with AndrA (c) and Simone Weil

Translated from the French by Benjamin Ivry, Simone Weil was one of the twentieth century's most original philosopher-critics, and as a result her legacy has been claimed by many.

This memoir by Weil's niece is strong-willed and incisive and as close as we are likely to get to the real Simone Weil.

Born into a freethinking Jewish family, Weil contributed many articles to Socialist and Communist journals and was active in the Spanish Civil War until her health failed.

In 1940 she became strongly attracted to Roman Catholicism and the Passion of Christ.

Most of her works, published posthumously, continue to inform debates in ethics, philosophy, and spirituality surrounding questions of sacrifice, asceticism, and the virtues of manual labor.

Sylvie Weil recovers the deeply Jewish nature of Simone's thinking and details how her preoccupations with charity and justice were fully in the tradition of tzedakah, the Jewish religious obligation toward these actions.Using previously unpublished family correspondence and conversations, Sylvie Weil offers a more authentically personal portrait of her aunt than previous biographers have provided.

At Home with AndrE and Simone Weil illuminates Simone's relationship to her family, especially to her brother, the great Princeton mathematician AndrE Weil.

A clear-eyed and uncompromising memoir of her family, At Home with AndrE and Simone Weil is a fresh look at the noted French philosopher,mystic, and social activist.