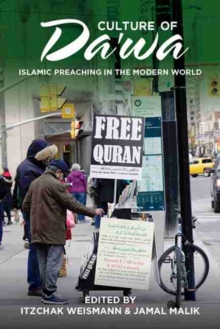 Culture of Da'wa : Preaching in the Modern World

This book provides the first in-depth, wide-scope treatment of da'wa.

A term difficult to translate, da'wa covers a semantic field ranging from the call or invitation to Islam, to religious preaching and proselytizing, to the mission and message of Islam.

Historically da'wa has been directed outward to nonbelievers, but in modern times it has turned increasingly inward to 'straying' Muslims.

While the media and many scholars have focused on extremism and militant groups that have raised the banner of jihad, this volume argues that da'wa, not jihad, forms the backbone of modern Islamic politics and religiosity, and that the study of da'wa is essential for understanding contemporary Islamic politics as well as jihadist activity.

Contributors represent a variety of approaches and come from a range of academic, religious, and national backgrounds.

In these essays, they analyze the major discourses of da'wa, their embodiment in the major Islamic movements of the twentieth century, and their transformation into new forms of activism through the media, the state, and jihadi groups - including al-Qaeda and ISIS - in the twenty-first century.