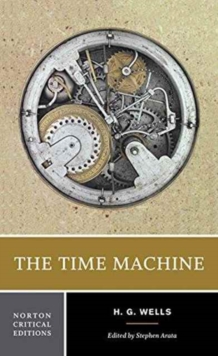 By: Wells, H. G.,  Arata, Stephen (University of Virginia)(Edited by)

Intrigued by the possibilities of time travel as a student and inspired as a journalist by the great scientific advances of the Victorian Age, Wells drew on his own scientific publications-on evolution, degeneration, species extinction, geologic time, and biology-in writing The Time Machine.

This Norton Critical Edition is based on the first London edition of the novel.

It is accompanied by detailed explanatory annotations and "A Note on the Text." "Backgrounds and Contexts" is organized thematically into four sections: "The Evolution of The Time Machine" presents alternative versions and installments and excerpts of the author's time-travel story; "Wells's Scientific Journalism (1891-94)" focuses on the scientific topics central to the novel; "Wells on The Time Machine" reprints the prefaces to the 1924, 1931, and 1934 editions; and "Scientific and Social Contexts" collects five widely read texts by the Victorian scientists and social critics Edwin Ray Lankester, Thomas Henry Huxley, Benjamin Kidd, William Thomson (Lord Kelvin), and Balfour Stewart and Peter Guthrie Tait. "Criticism" includes three important early reviews of The Time Machine from the Spectator, the Daily Chronicle, and Pall Mall Magazine as well as eight critical essays that reflect our changing emphases in reading and appreciating this futuristic novel.