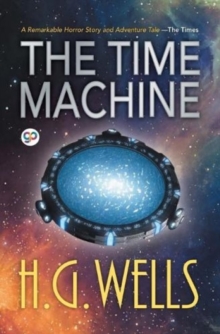 One of the most loved science fiction novels of all time, H.G.

Wells' 'The Time Machine' is a novel that crafts a vivid and haunting picture of an earth some 800,000 years into the future.

First published in 1895, it was one of the first novels to deal with the concept of time travel and due to its popularity has come to be regarded as one of the most impactful works on the development of the science fiction genre. In his work 'The Time Machine', Wells Time Traveller, a gentleman inventor living in England, traverses first thousands of years and then millions into the future, before bringing back the knowledge of the grave degeneration of the human race and the planet.

One wonders if Wells could truly see into the future, as over 100 years after its publication date his visions seem timelier than ever.

The Time Machine has since been adapted into many feature films and television series and has inspired many more works of fiction. ABOUT THE AUTHOR:HG Wells (Herbert George, 1866) was born to a working class family in Kent, England.

Young Wells received a spotty education, interrupted by several illnesses and family difficulties, and became a draper's apprentice as a teenager.

The headmaster of Midhurst Grammar School, where he had spent a year, arranged for him to return as an 'usher', or student teacher.

Wells earned a government scholarship in 1884, to study biology under Thomas Henry Huxley at the Normal School of Science.

After marrying his cousin, Isabel, Wells began to supplement his teaching salary with short stories and freelance articles, then books, including 'The Time Machine' (1895), 'The Island of Dr. Moreau' (1896), 'The Invisible Man' (1897), and 'The War of the Worlds' (1898). Wells created a mild scandal when he divorced his cousin to marry one of his best students, Amy Catherine Robbins.

Although his second marriage was lasting and produced two sons.

Wells used his international fame to promote his favorite causes, including the prevention of war, and was received by government officials around the world.

He is best remembered as an early writer of science fiction and futurism.