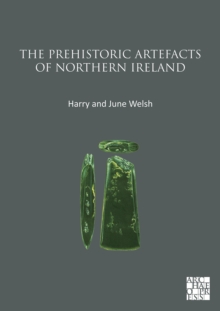 The prehistoric artefacts of Northern Ireland

Following the same format as its predecessors, this monograph considers the prehistoric artefacts that have been found in Northern Ireland.

It begins with an overview of the current political landscape of Ireland, as the creation of two states in 1921 and the establishment of administrative systems unique to each jurisdiction have had profound consequences for Irish archaeology.

It continues by providing background information on the history of prehistoric archaeology, an explanation of the classifications and methodology employed and a detailed inventory of sites in Northern Ireland where prehistoric artefacts have been found.

Also included is a discussion about these artefacts in a wider context, illustrated with tables and distribution maps, a glossary, tables of radiocarbon dates and an extensive bibliography.

The aim once again is to not only provide a basis for further research, but also to stimulate local interest in the prehistory of Northern Ireland and encourage others from further afield to appreciate the quality and diversity of its prehistoric landscape.