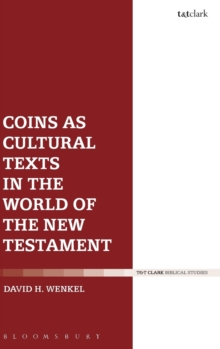 Coins as cultural texts in the world of the New Testament

Coins have long been a vital part of the discipline of classical studies of the ancient world.

However, many scholars have commented that coins have not been adequately integrated into the study of the New Testament.

This book provides an interdisciplinary gateway to the study of numismatics for those who are engaged in biblical studies.

Wenkel argues that coins from the 1st century were cultural texts with communicative power.

He establishes a simple yet comprehensive hermeneutic that defines coins as cultural texts and explains how they might be interpreted today.

Once coins are understood to be cultural texts, Wenkel proceeds to explain how these texts can be approached from three angles.

First, the world in front of the coin is defined as the audience who initially read and responded to coins as cultural texts.

The entire Roman Empire used coins for payment. Second, the world of the coin refers to the coin itself - the combination of inscriptions and images.

This combination of inscription and image was used ubiquitously as a tool of propaganda.

This third angle explores the concept of authorship of coins as cultural texts.