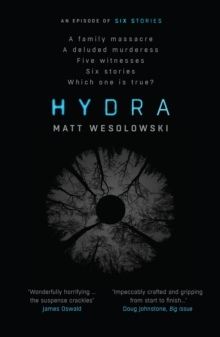 Part of the Six Stories series

Elusive online investigative journalist Scott King investigates the case of Arla Macleod, who bludgeoned her family to death, in another episode of the chilling, award-winning Six Stories series. 'Bold, clever and genuinely chilling with a terrific twist that provides an explosive final punch' Deidre O'Brien, Sunday Mirror'A genuine genre-bending debut' Carla McKay, Daily Mail'Impeccably crafted and gripping from start to finish' Doug Johnstone, The Big Issue________________A family massacreA deluded murderessFive witnessesSix storiesWhich one is true?One cold November night in 2014, in a small town in the north west of England, 21-year-old Arla Macleod bludgeoned her mother, father and younger sister to death with a hammer, in an unprovoked attack known as the Macleod Massacre.

Now incarcerated at a medium-security mental-health institution, Arla will speak to no one but Scott King, an investigative journalist, whose Six Stories podcasts have become an internet sensation. King finds himself immersed in an increasingly complex case, interviewing five witnesses and Arla herself, as he questions whether Arla's responsibility for the massacre was a diminished as her legal team made out. As he unpicks the stories, he finds himself thrust into a world of deadly forbidden 'games', online trolls, and the mysterious black-eyed kids, whose presence seems to extend far beyond the delusions of a murderess... Dark, chilling and gripping, Hydra is both a classic murder mystery and an up-to-the-minute, startling thriller, that shines light in places you may never, ever want to see again. ________________Praise for the Six Stories seriesMatt Wesolowski brilliantly depicts a desperate and disturbed corner of north-east England in which paranoia reigns and goodness is thwarted ... an exceptional storyteller' Andrew Michael Hurley'Beautifully written, smart, compassionate - and scary as hell.

Matt Wesolowski is one of the most exciting and original voices in crime fiction' Alex North'Wonderfully horrifying ... the suspense crackles' James Oswald'Original, inventive and dazzlingly clever' Fiona Cummins'A complex and subtle mystery, unfolding like dark origami to reveal the black heart inside' Michael Marshall Smith'Endlessly inventive and with literary thrills a-plenty, Matt Wesolowski is boldly carving his own uniquely dark niche in fiction' Benjamin Myers'Disturbing, compelling and atmospheric, it will terrify and enthral you in equal measure' M W Craven'Readers of Kathleen Barber's Are You Sleeping and fans of Ruth Ware will enjoy this slim but compelling novel' Booklist'A relentless and original work of modern rural noir which beguiles and unnerves in equal measure.

Fans of Arthur Machen, whose unsettling tale The White People provides an epigraph, will want to check this one out' Publishers Weekly'For those who like the book they curl up with in their favourite slipper socks to generate a powerful sense of unease, and impel them to check all doors are locked and as many lights turned on as possible, Matt Wesolowski has just the formula to meet your self-scaring needs... ' Strong Words