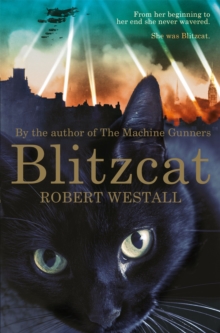 She made her way down the cliff, and on to the beach.

At the edge of the waves, she stopped, shaking her wet paws.

She knew that somewhere ahead was her person, but far, far away.

She miaowed plaintively; stood staring at the moving blur of uncrossable sea. She led the way to safety, out of the blazing hell of blitzed Coventry.

People touched her for luck; feared her as an omen of disaster.

Wherever she went, she changed lives . . . From her beginning to her end she never wavered. She was the Blitzcat. Blitzcat by Robert Westall is the Smarties Prize-winning book about one brave cat's experiences during World War Two.

Now with a brilliant new cover look and including an extended author biography.