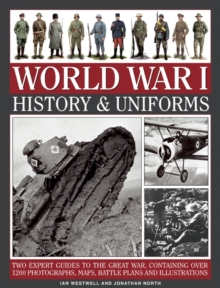 This is a concise and authoritative account of the course of the First World War, with analysis of decisive encounters and landmark engagements.

It offers a full description of every major battle on land and at sea, detailing military strategy, successes and failures.

It is an expert guide to the military uniforms of Britain, France, Russia, America, Germany and Austria-Hungary, with additional detail on the armies of Portugal, Belgium, Italy, Serbia, the Ottomans and Japan.

It reviews the major weapons of war, from Dreadnoughts and U-boats to tanks and anti-aircraft guns.

It is a highly readable box set illustrated with more than 1200 compelling contemporary photographs, maps and plans of key engagements, as well as superb illustrations of wartime uniforms, kit, weapons and insignia.

The two books in this magnificent collection give an authoritative insight into the war of 1914 to 1918 - the first truly global conflict.

The Complete Illustrated History of World War I chronicles the course of the war a year at a time, examining all the major battles and also the weapons and tactics that often decided the outcomes. An Illustrated Encyclopedia of Uniforms of World War I examines the uniforms of the armed forces, which mirrored the dramatic political and social changes of the era.